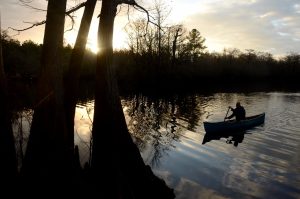 The St. Marys River is a blackwater river which runs 126 miles from its origin in the Okefenokee Swamp to its mouth between Cumberland Island, Georgia and Amelia Island Florida. The  watershed has more than 3,000 miles of streams and tributaries. Wetlands comprise more than 40 percent of its watershed. The river  creates the easternmost border between Georgia and Florida. 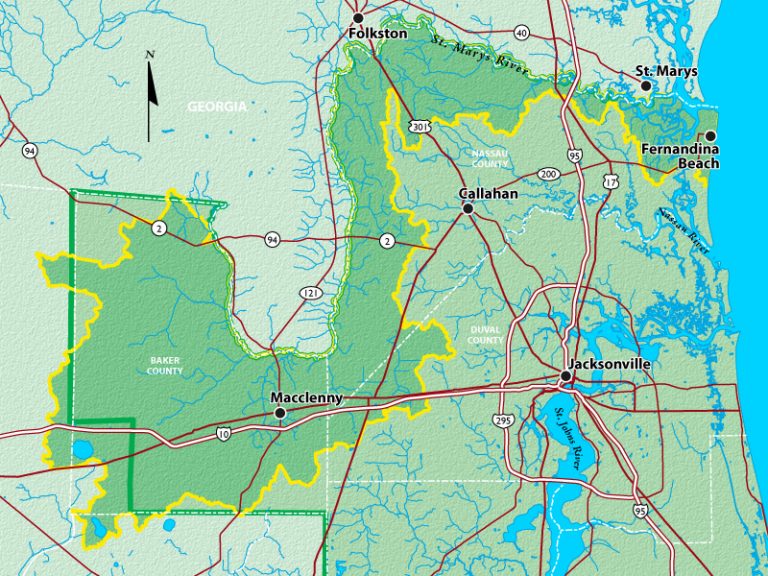 The lower portion is primarily where its few urban population centers are located including the cities of St. Marys, Georgia and Fernandina Beach and Yulee, Florida. The upper portion is mostly wetlands and forests, with small communities and public lands along the banks.

Forests comprise a substantial portion of the entire basin area. Much of the upland areas are managed tree plantations, and assist in maintaining good water quality.  The upper river’s wetland areas include extensive oak hammocks and natural plant ecologies, which contribute to abundant native wildlife habitat.  In addition to the Okefenokee Swamp at the river’s headwaters, other public land along the St. Marys includes the Ralph E. Simmons Memorial State Forest. The State Forest encompasses more than 3,600 acres along the south banks of the river, northeast of the community of Boulogne., FL. This property managed by the St. Johns River Water Management District, which ensures preservation of 6.7 miles of the St. Marys River shoreline.

The St. Marys River also flows through the 15,000 acre privately-owned White Oak conservation plantation – home to many endangered and exotic species. Started by Howard Gilman, now owned by a private investment group, the conservation park plans to continue to save large animal exotic species while offering educational and retreat housing. Another large land owner is Rayonier – which manages large silviculture (forestry) tracts comprised of “working forests”. Rayonier owns 355,315 acres in the four-county area the river runs through, much of it in the river’s watershed.

From its upper and middle reaches of fresh, tannin-rich water, the river widens 20-miles downstream as it becomes a rich estuary of tidal waters approaching its mouth at the Atlantic Ocean. The cities of St. Marys, Georgia,  Yulee and Fernandina Beach, Florida, represent the major population centers on the river. The area is known for its great fishing and seafood. Oysters and shrimp are a delicacy of this rich estuary.

Cumberland Island, the barrier island on the Georgia-side, forms the northern mouth of the river. Once a winter retreat for the Carnegies, the island is a National Seashore of the National Park Service and, in the 1970’s, was designated a National Wilderness area. (Source: saintmarysriver.org)

The river, with its extensive marsh system, relative lack of urban development and few pollution discharge points, has generally excellent water quality. The lower portion of the St. Marys is tidally-influenced and reverse flows occur twice daily. Forests comprise a substantial portion of the entire basin area, much of which are managed tree plantations, and assist in maintaining good water quality.

From its cypress and bottomland hardwood swamps to its salt marshes and mud flats, the St. Marys Basin provides habitat for a diversity and abundance of animals and plants. Many native tree species are found in the basin, including: cypress; yellow pine; gum; magnolia; maple; holly; poplar; willow; river birch; and, a variety of oaks. Wildlife in this area includes deer, otter, beaver, raccoon, alligator, gopher tortoise, turkey and ribbon snakes. The middle portion of the river supports bear, panther, bobcat and the red-cockaded woodpecker. Popular sportfish include redbreast sunfish, bluegill, largemouth bass and various catfish.

The St. Marys River offers many opportunities for recreation and sightseeing. Canoeing, boating, fishing, camping and water-skiing are just some of the ways to enjoy the river. The upper reaches of the St. Marys – the north and middle prongs – are narrow, twisting streams with good current and beautiful cypress and tupelo trees.

After the two prongs meet, the river becomes wider and is characterized by bluffs, swamps and snow-white sandbars. It is an excellent touring river because development along the banks is scattered and infrequent and campsites are plentiful. Popular sportfish include redbreast sunfish, bluegill, largemouth bass and various catfish.