Two months after deploying the second groups of traps, we have evidence of success! Baby oysters- knowns as “spat” have taken hold all over the host shells. The reef is off to a great start! 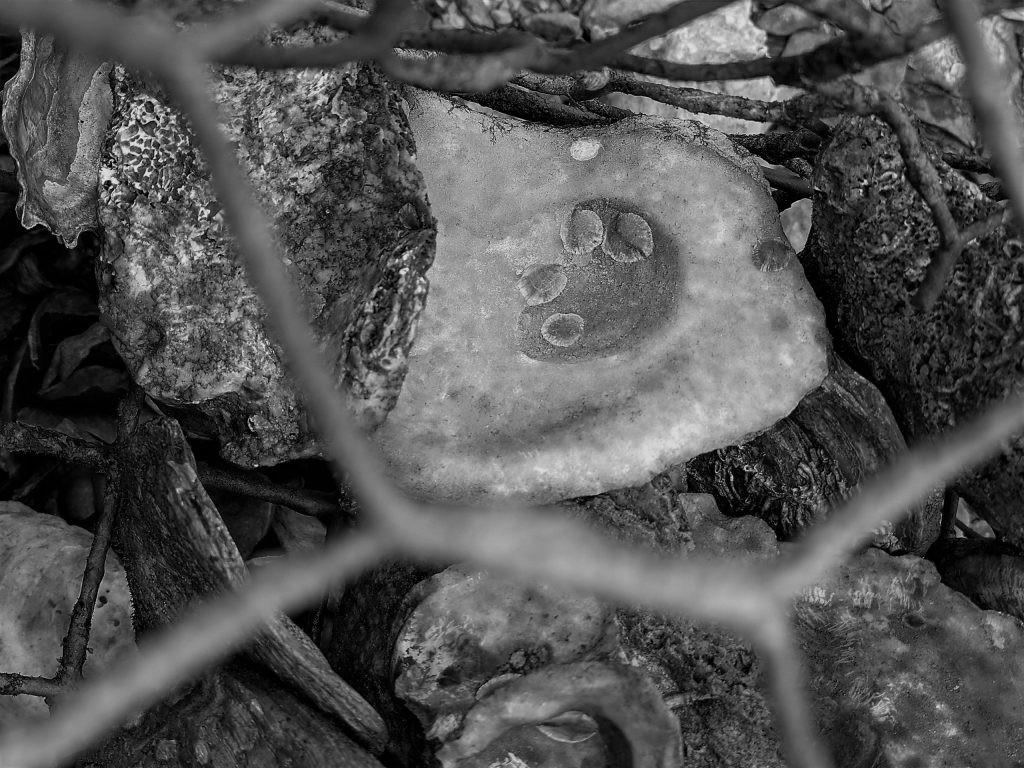 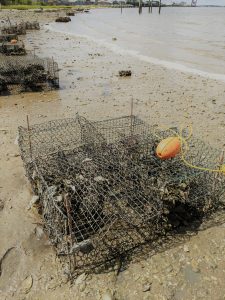 Much appreciation to Burbank Trawlmakers for the deeply discounted crab trap floats! We had to add them to our traps so they can be seen by boaters and kayakers at high tide. Thanks also to the Amelia Island Sailing Club for helping tie the floats on – their knowledge of marine knots came in very  handy! 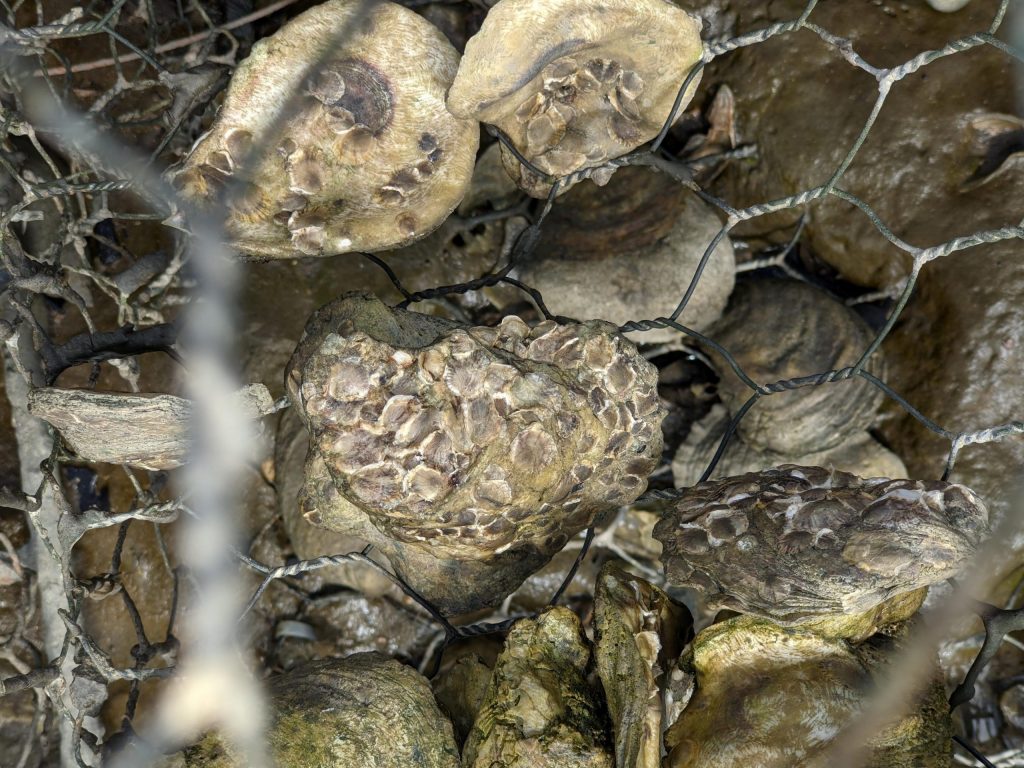 5/1/2021- FERNANDINA BEACH, FL — As the tide crept higher and higher, undergraduate students from the University of North Florida’s Coastal and Marine Biology Program hustled to install their crab trap structures along the mud-slick shoreline. The students joined forces early Saturday morning with volunteers from the St. Marys Riverkeeper (SMRK) to plant beat-up old crab traps into the surf, with the understanding that they will appear as dream palaces to oysters.

In all, arrays of 70 crab traps were added to the living shoreline along the Amelia River at Fernandina Beach’s Old Town, completing a project that began with an initial crab trap reef in 2019, said St. Marys Riverkeeper Anna Laws.

“We used reclaimed crab traps filled with oyster shells to rebuild a reef offshore,” she says. “The first group of traps has held together quite well over two years and shown significant oyster growth. Now, we are taking what we have learned and adding a line of structures to act as a wave break. We also have designated specific traps for a student study.”

The shoreline was lively at sunrise as the students and Amelia Island Sailing Club volunteers carried traps to the coast, wired them together and secured them in the proper location. Fifteen students listened closely through the misty salt wind to the directions of their instructor, UNF Biology Professor Kelly Smith.

“It was an excellent learning experience for them,” Smith said. “They get a lot out of seeing the challenges of setting up an experiment in low tide.” Her students will be comparing two types of structures, one using cemented oyster shells and one using loose oyster shells, to see which recruits the most new oysters over time, she said. Some UNF Geography and GIS students of Dr. Chris Baynard also participated, adding a high tech element to the morning with their drone flying overhead.

This experiment, and others like it, are extremely important in the rapidly evolving study of living shorelines, Laws said. Living shorelines are made of natural materials that reduce coastline vulnerability to sea level rise and increasingly stronger storm events. They also prevent erosion, improve water quality, provide fisheries habitat, increase biodiversity and promote recreation.

“Oysters are the superstars in the world of living shorelines,” Laws said. “If we can re-grow oysters here – and have the benefit of creating a wave break that will allow the marsh grass to spread – we are going to have a really positive change here in the next few years.”

From the shore, the Old Town Living Shoreline can be viewed from the Fernandina Plaza Historic State Park, unless it’s high tide and the reef is underwater. The Amelia River is the mouth of the St. Marys River, which begins in the Okefenokee Swamp in Georgia and makes a 130-mile path to the Atlantic Ocean. The St. Marys Riverkeeper promotes coastal resiliency projects such as this one throughout the watershed, Laws said.

Living shorelines are growing in popularity in coastal states as an option to traditional “hardened” shorelines, such as sea walls. In many places homeowners are waiting months or even years to get permits for living shorelines. 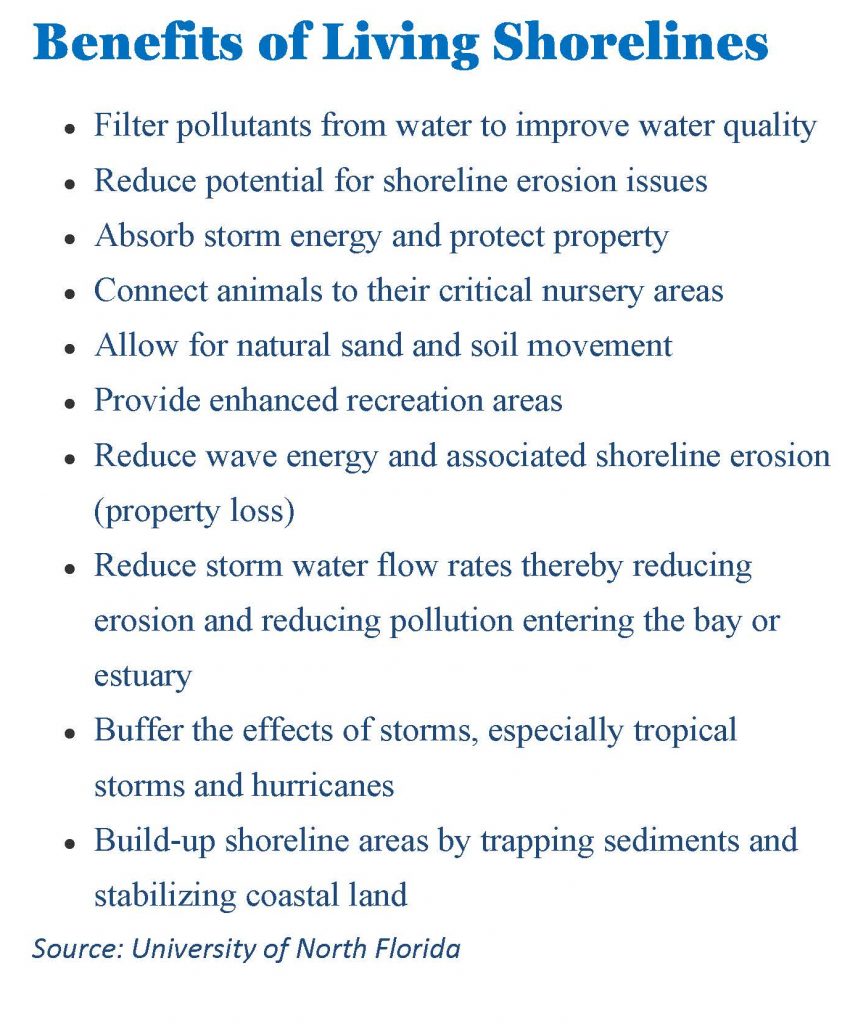 Jan Mackinnon, a biologist with the Georgia Department of Natural Resources Coastal Resources Division, is the project manager for Georgia’s living shoreline projects, including Sapelo Island and Little Simons Island. She is a huge advocate for living shorelines and says the two biggest obstacles are slow permitting and oyster shell sourcing.

“Oysters are natural ecosystem engineers for the southeast,” Mackinnon said. “We have lost a lot of reefs over the decades.” Oyster shells must be treated to prevent bacterial contamination before use in living shoreline projects, Mackinnon said. Restaurants are the primary sources.

Many living shorelines consist primarily of stacks of net bags of oyster shells, creating an extension of the shoreline when combined with native plants.

When the first set of crab traps were installed at the Old Town Living Shoreline in 2019, SMRK was fortunate to have the assistance of Dan “the Oysterman” DeGuire, a former commercial oysterman who died in 2020. He used crab traps to grow oysters for years. They obtained the traps from a non-profit organization that collected them rather than letting them go into a landfill.

“It was a kind of recyclable thing to take these old traps and turn them into something useful,” according to Rick Frey, DeGuire’s friend and founder of the St. Marys Riverkeeper. “Also, it creates a structure that the oysters would cling to much easier and much quicker.”

The Old Town Living Shoreline is now one of the regular stops for the eco-tour boats that travel daily out of the Fernandina Beach Marina. “The tourists get a lesson in the importance of oysters to the ecosystem,” Frey says. “One oyster can filter up to 50 gallons of water a day. They’re really amazing.”

Timeline of a Shoreline 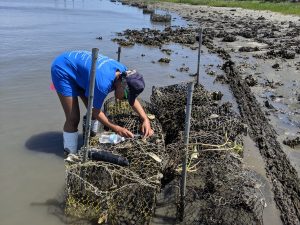 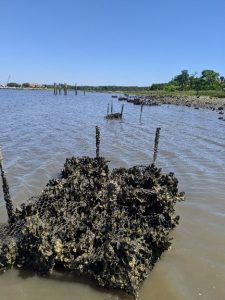 May 2020 – a year has passed. The reefs have shown excellent growth. The COVID-19 pandemic prevents SMRK from adding to the shoreline as planned. 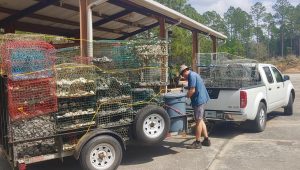 March 2021 – UNF students collected 100 gallons of oyster shells as part of the Oyster Shell Recycling program at Guana Tolomato National Estuarine Research Reserve in St. Johns County, FL. Volunteers from SMRK collected the shells from Guana, then traveled to UNF in Jacksonville to pick up more than fifty used crab traps, which UNF students had collected over the previous year. 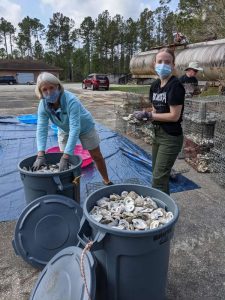 April – The crab traps were transported to a staging area at White Oak Conservation Park in Yulee, FL, where UNF and SMRK volunteers prepared them. They coated them with concrete slurry and filled them with oyster shells. 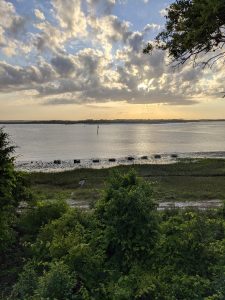 May 1 – Phase Two of the shoreline is installed.

Tickets are now available for our 2022 Big Splash Gala!